A walk between two people in four parts over the course of one day.

A combination of the texts and photographs of Blake Morris and Andrew Howe.

A walk authored together.

DSB – Waiting Turns
A dog down by the river bank scrabbles in fallen leaves
Leaving a deposit for its two owners to find
Market men sort fruit
Pensioners arrange bags
Cyclists commute
Sweeping smoothly along the wide pathway from my right
Intermittently appearing/disappearing behind trees
The buzz of a leaf blower
Like an aggravating gnat
Pedestrian beeps signal crossing
The dog walkers pass in front of me, a man and woman
They lift the lid of the dog bin
Noticing me noticing
The danger of Watching.

Figures silhouetted between railings move quickly towards the town

Two loud bangs from a site further to the north

Like a performance score, a walk is an open-ended phenomenon, no one knows in advance what will present itself or who you might meet. The meaning is in the doing, properly performative then, which is to say, self-generating, contingent, improvisatory, light-footed and rooted in the everyday. It is also unexpected.

Carl Lavery, ‘Interruption… Walking and Ruination – or what it means to keep a secret’, in Clare Qualmann and Claire Hind Ways to Wander (Axminster: Triarchy Press, 2015).

Under my gaze and in a blink, ephemera gain gravitas | Making it consequential

A black hydrant on cast iron pillar stands next to the crumbling brick wall of Old St Chads | Enjoy: hide and go seek during the day; toilet facilities at night. 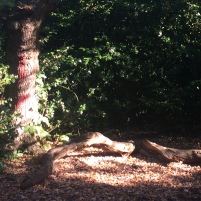 The chestnut tree comes into view | The tree a meeting point; a location for conversation

I retrace my steps, and the connecting path burns into my memory | before darting off into a cluster of trees on the path back home.

As we produce the social spaces around us, both materially and across digital networks, we are engaging in the production of space through movement. How we conceive of this movement determines how we will practice and live in the spaces we create.

iii. following
Long tailed tits
gathered in a crab apple tree
a cat
from stillness to disappearance
A magpie
emerged to pull me further on into the field
two women
from afar who went immediately inside
an aircraft
high above, took me at steady pace
a car
moving too quickly to keep up
a soft breeze
Briefly I let myself be nudged by
A man
carrying a pet container stopped on a corner to chat

I allowed myself to drift, handing over control to the
birds
Skirting along warm pavement following
sun
Driving me steadily to the hedge at the edge of the field

Following or drawn towards?

Always towards the builders

I moved towards them until my route intersected a desire path

the possibility of escalation was embedded in participant’s sense making of following to the extent that for many if the practice did not escalate, despite their subjective experience, participants felt unable to verify that something had happened.

The four sections of the walk resolve here: 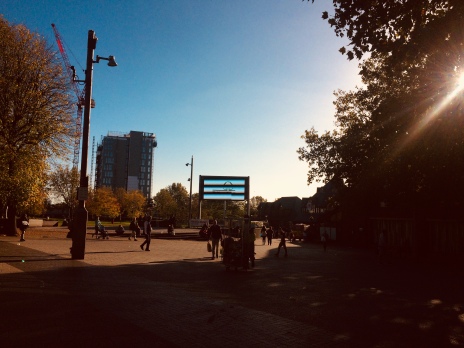 I stayed still to explore my visual frame. I walked through the Mall to see the ins and outs. Engaged with the simultaneity of stories-so-far. Outside the pigeons change position but stay within the square. These repeated movements are choreographed.

If, however, the spatial is thought of in the context of space-time and as formed out of social interrelations at all scales, then one view of a place is a particular articulation of those relations, a particular moment in those networks of social relations and understandings.