In his 2007 book The Wild Places Robert Macfarlane describes walking out of Cambridge and climbing a tree. He goes on to discuss the call of wild places, and explores several; venturing across moors, to remote islands, valleys and mountains.

I have a seven month old baby. I would like to climb a tree. I am going to need some help.

In 2008 Judith Butler and Sunaura Taylor went on a walk together in San Francisco. In their section of Astra Taylor’s film The Examined Life they discuss interdependence and the importance of access and visibility. We never walk alone.

My family is five-thousand miles away. I would like to build a world-wide walking community. I am going to need some help.

In her 2009 book Maternal Encounters: The Ethics of Interruption Lisa Baraitser describes the peculiar stretching of time in motherhood; encumbered by ‘mother-stuff’ – pram, nappy bag, muslins, sippy cups, sun hats, raincovers – moving as if through treacle so that simply crossing a road feels like it takes forever.

We walk together and alone. With prams and without. We explore landscapes with each other and across distances.

Practice takes time, and what do you do when you don’t have the privileges that provide time? How do you continue to practice (as an artist, a researcher, an academic) with a baby? Without institutional affiliation? Without social and infrastructural support? How does a life shift impact your mobility, your sense of capability, your spontaneity, your freedom to walk?

In the Ecologies of Practices Workshop we will explore ecologies of interdependence through the unexpected sight of the pram in the landscape, in the countryside. We will depend on each other to build community and overcome boundaries as we walk to the Village Hall. It will be a feat of effort, a performance of absurdity, a gathering of community, to make it there.

Clare was late for our train. She underestimated the extra time her journey would take with a pram. Going round the long way to gain access to the lift; waiting for help to carry the pram up and down stairs; mid-journey excrement requiring a nappy change.

We missed our first two trains. We ran, pram wheels flying and baby Astrid laughing, as the second train pulled out of Waterloo and ensured our tardy arrival. At the taxi rank in Guildford we transferred Astrid to a sling and quickly found a van that would accommodate the pram (unable to fold due to technical problems). We hastily shoved it in the boot and piled in. The group was waiting for us as we arrived at the GSA Building. We repeated the process, and with a slight shove the pram was secure in the back of the bus.

After a short drive to the cemetery we disembarked. During transit the pram wheel had jammed. It no longer rolled properly. We faffed with the pram for a bit, before deciding to carry on with the two wheels that worked. I followed a quaint wooden sign toward Wonersh Cemetery, and led the group up a steep dirt hill, pushing the pram on two wheels to keep the jammed one hoisted in the air. As we reached a construction site at the top I turned to Yaron, who organised the workshop, and said, ‘I think we’ve gone the wrong way’. I passed the pram to someone else as we trekked back down the hill to where we began. Left at the fork and we were on the right track.

The cemetery was only a few minutes away. Once there we set out to fulfil my weekly instruction from Ways to Wander: walk through a cemetery and look for ‘as many tombstones with the family name “Walker” on them as you can.’ Simultaneously in Canada and the USA, three walkers were exploring cemeteries looking for their own Walker graves.

In Wonersh we found John and Sandy Walker. Carol’s walk in the Brandywine Cemetery revealed Sally B. Walker and Lambert & Patricia Walker. In Canada Barbara and her friend revisited Corona Walker, whose tombstone in Dartmouth inspired the original score; they discovered a few other walkers as well, Albert and Augusta among them.

Our tombstone found, we headed through the heath to the Village Hall. We took turns carrying the pram along single dirt tracks and up hills through the dense forest. Less epic than we imagined, we reached our final destination with time to spare. A plaque in front of the Hall let us know that it was once host to hundreds of British and Canadian troops during the second world war, a fact that solidified the connection to our comrades walking at a distance.

Looking at the Walkers in Wonersh Cemetery (Photo: Blake Morris)

Derek McCormack, a professor of geography at Oxford, had been invited to respond to the walk and spur further conversation. McCormack described a gravestone he came across in the cemetery–a little boy who lived only one day; this image, and the stories it suggests, lingered with him as we carried Astrid and pram through the forest. In Canada, Lounder and her friend ended their walk at an Indigenous burial site; once consecrated as a catholic church, it is still home to unmarked Mi’kmaq graves. In Wilmington, Maurer came across a family of five who died on the same day–a mother and four children. Later research revealed they had died in a fire. As we walked we carried with us the stories of the dead–imagined walkers we had never known–and the histories that connected them to us.

In ‘Profiling the passenger: mobilities, identities, embodiments‘, McCormack writes, ‘[t]o parent is to carry’ (174). Not just physically, but mentally as well. Parents, and mothers especially, carry with them the hopes, fears and burdens of their families; the imagined successes and setbacks; the workaday necessities to keep the pram wheel oiled and life rolling along smoothly. The technologies of carrying have evolved, offering ‘[e]ndless options’ for ‘new ways of being mobile with infants’: ‘access to muddy fields, towpaths, festivals and farms’ (ibid.); but for us, it wasn’t the technological prowess of the pram that made our walk possible, it was the support of the group. The financial support, provided by the University of Surrey who paid us appropriately for our work; the support of the workshop participants, who searched the cemetery for Walker tombstones and helped us fix, carry and push the pram through heath; and the intellectual support provided by the group’s considered response and critical thinking.

Clare never did find a tree to climb, but we accomplished our goals nonetheless. We walked from the grave with the cradle, building a global community of walkers along the way. 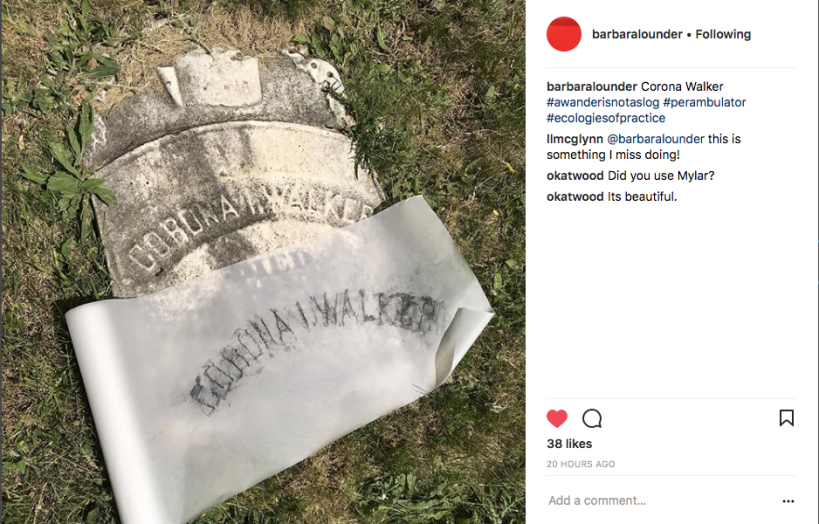